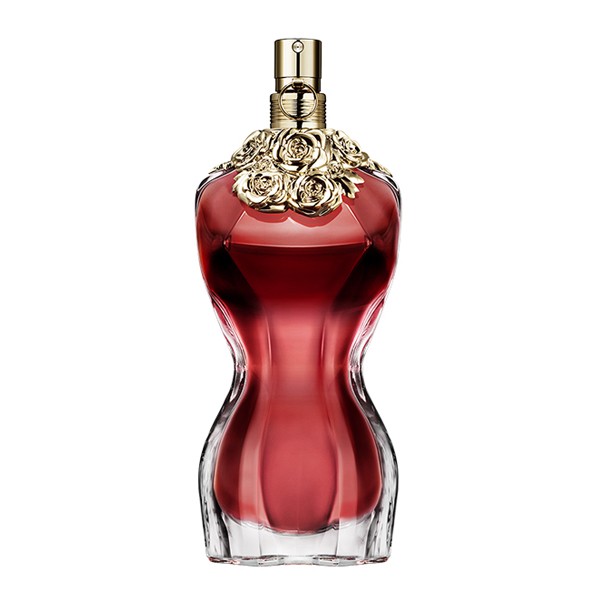 Jean Paul Gaultier created the Eau de Parfum La Belle in his own image: with an ultra-sensual femininity.

A dream body! Female hips, a thin waist and an opulent floral necklace. An Eau de Parfum for women, which finds the irresistibility of vanilla, the freshness of the bergamot and the glow of the pear. A luminous and addictive scented aura for an attractive woman who is ultra feminine.

The bottle and packaging of La Belle de Jean Paul Gaultier is presented in a bottle in the shape of a woman's bust. It has a red bathed in pink, and speaks of modesty, as well as the most indifferent debauchery. Around the neck, the gold roses form a necklace, a modest cover that serves only as an invitation to a final discovery full of temptations...

La Belle is presented as a flank of the famous Classique, while the bottle of the latest edition takes the form of parfum's Classique Essence edition of 2016, here with the juice colored in red, which adapts very well to the appearance.

La Belle is certainly a new step for the Gaultier line, and is different from its predecessors, very different even from the Classique edition. The pear in the opening is very juicy and fruity, and with its woody notes and vanilla makes a sweet and nutty band. There are some lemon tones, which give a lightness to the dry heart of walnut, layered in an oriental vanilla and sweet touched with a tropical breeze. In addition, the delicate salty aspects make the rich and dry woody notes more exotic and more interesting. During development, the composition becomes warmer and more woody, leaving a soft sweetness to seduce discreetly.